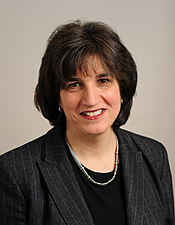 As Warde Manuel was officially being introduced as the new Michigan athletic director, the University of Connecticut released a statement revealing that Rachel Rubin has been appointed interim AD as the school begins a national search to replace Manuel.

Rubin, who first began her career at UConn as an associate athletic director, currently serves as President Susan Herbst’s Chief of Staff. According to the ‘office of the president’s’ website, “Rachel works with the President on all her initiatives, coordinates the activities of her senior administrative team, and oversees the day-to-day operations of her office.”

Rubin will be a part of the committee that has been appointed by Herbst to conduct the national search. The rest of the team?

While being introduced, Warde reflected back on his time at UConn with only positive things to say, including ‘UConn deserves to be in the Power 5 and I hope to see them there soon.’

If and when UConn holds an introductory press conference, This Is UConn Country will have live coverage.