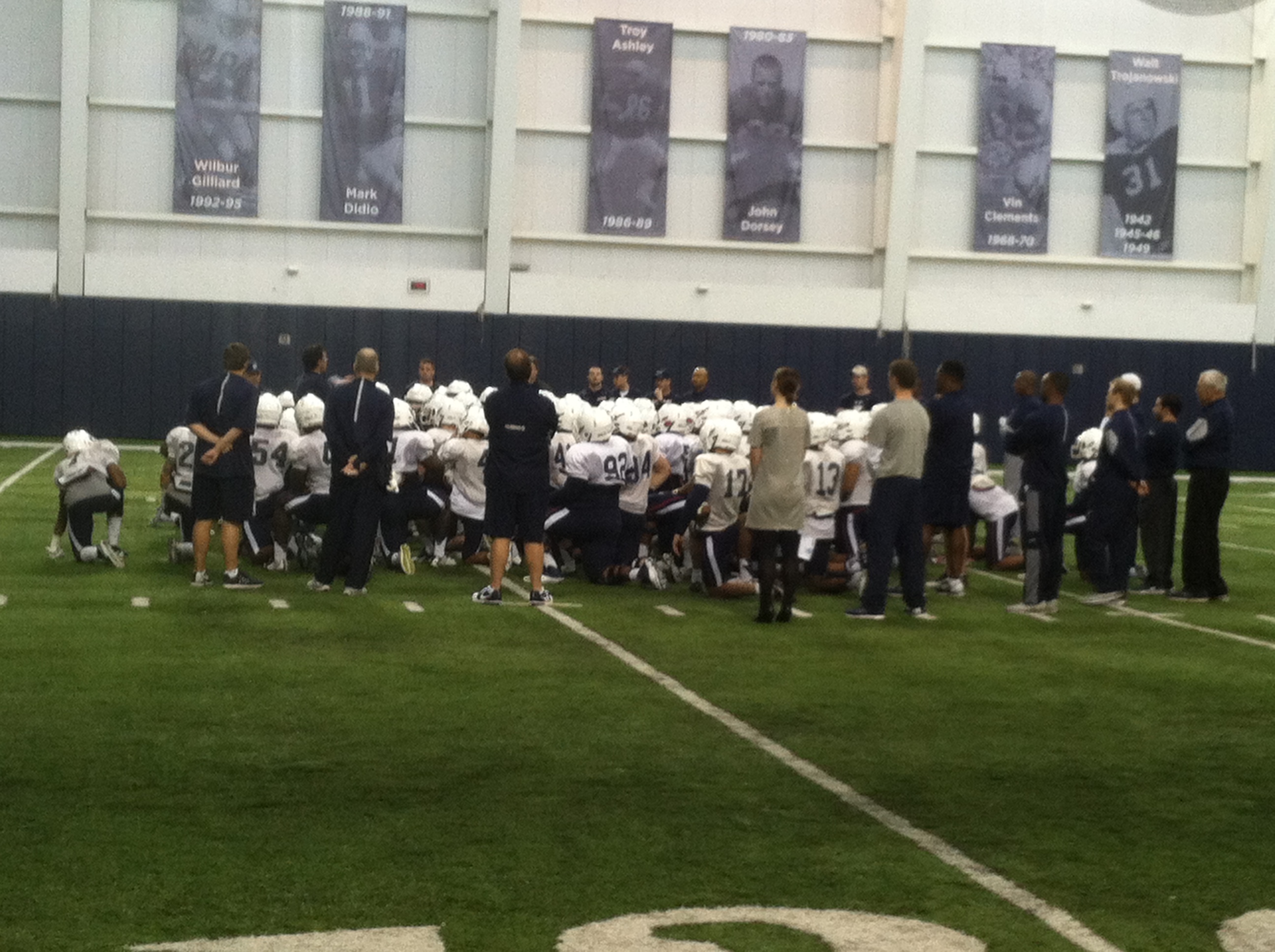 The UConn Football program held their final practice before Saturday’s spring game this morning and if their performance is anywhere close to what was seen today, the anticipation for the start of 2016 is going to be through the roof.

Where to begin? There was a pick-6 by LB EJ Levenberry, three consecutive touchdown receptions by redshirt freshman Frank Battle during 7-on-7’s, an explosive looking Ron Johnson breaking big gain after big gain and even CB Jamar Summers and TE Alec Bloom rotating as the long snapper on punts; Summers by the way was the first man down the field. You could say today’s practice, had it all.

Not to be missed, the Huskies offensive line looks stout, P Justin Wain was booming kicks with so much hang time, he even bounced one off of the Mark R. Shenkman Traning Center’s roof and sophomore Hergy Mayala made a highlight reel, one-handed TD grab with a defender draped all over him in the corner of the end zone.

The new man in charge of UConn athletics, Dave Benedict, was in attendance and he had to love what he saw. The energy and fire was apparent throughout. Head coach Bob Diaco held teaching moments from his usual work with the linebackers to assisting backup punter Michael Tarbutt on his technique after a few short punts.

After Ron Johnson ripped his second consecutive long run, Diaco calmly came to the sidelines to correct the mistakes from his defensive unit. Next play, he was fist bumping Levenberry after a nice stop. Every position group seems further along, more confident, more productive and much, much faster.

But the one thing that cannot be missed, the energy. After a short 3rd and 4 pickup on the ground, the entire offense reacted in what could be called, a game winning play. It’s the energy and enthusiasm that Diaco sees every day, from the start to finish of practice and even off the field.

“We do an exercise called ‘the drivers,'” Diaco said after practice. “We do it in the morning and they report on what drives them. I was looking at a picture today that someone was showing from a celebration after a win and was thinking, you really could take that photo, even at a lot of our practices. They bring that same energy, they’re hooting and hollering and having a good time. It’s really a good group to work with.”

The pace of practice feeds into that energy and enthusiasm level, as it has certainly been amped up a level this spring. Play making certainly doesn’t hurt. TE Chris Lee made a TD catch on a ball placed nicely over two defenders in the back of the end zone. The next play, CB John Green made a beautiful breakup on a corner route by Aaron McLean to save a score. Not giving up on the play, Green continued to battle as McLean was bobbling the ball, in the end knocking it away to save a touchdown. Secondary coach Anthony Poindexter and Diaco were ecstatic with the effort.

It was high level, all the time and if it was not, someone made sure it turned up. After seeing today’s practice, feel free to be optimistic about the stock of the UConn program. If it’s any indication of things to come, look out college football.