For Ryan Fitton, the first Connecticut native to commit to the 2017 UConn football recruiting class, playing for his home school was something he wanted to do from the start. At Staples, he made consistent appearances on the Class LL All-State Team and he was poised to join the Huskies program as a tight end for the 2017 season. Things became cloudy in December as changes to the staff made him reconsider his decision.

"Of course when the old coaching staff was fired, I was a little uncertain with things," Fitton confirmed over the phone earlier this week. "I had to look at other options as I really liked the old staff. After getting to know the new coaching staff, I had an in-home visit with Coach Edsall and his son [Corey], I realized that they are really a great group of guys. I'm comfortable with them and I really want them to be my coaches, so I decided to stick with UConn."

Fitton was on campus for his official visit this past weekend, the first under Edsall since his return to Storrs. It was a great experience that helped him get to know not only his future coaches, but some of his future teammates.

"I took my official visit this past weekend, so that was the first visit under the new staff that I took," he said. "I think we have had four commits since the official, they are all great guys and we are excited to have them. Definitely among the players there is a family atmosphere, we all get along very well. I like all the guys. Even the coaches, they get along really well with the players. It definitely feels like a family. I'm really excited to get this thing going and excited to be a Husky."

The Westport native who is also a standout pitcher, takes pride in being able to represent his home state. It's something that means a lot to him and contributed to his decision. 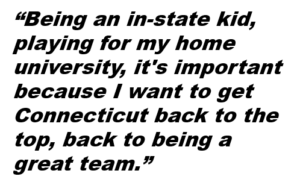 "It definitely did," Fitton responded. "Being an in-state kid, playing for my home university, it's important because I want to get Connecticut back to the top, back to being a great team. This is where I'm from and I want to represent that and come from a state with a great program."

Staples struggled on the field in 2016, going 5-5 after a 4-1 start, but Fitton highlighted that he was part of a hard working team that ran into some injuries and a strong schedule. The new staff has maintained the 6' 5" 230-pound Fitton will remain at the tight end position once he gets to UConn.

"I am still going to be a tight end," he confirmed. "With Coach Lashlee coming on, they told me that I'm a perfect fit for his offense. I can catch the ball, but also see me as more of a blocking tight end. I fit the system which I was happy to hear. I'm really looking forward to being under this new offense and what it has to bring."

What will fans see when he gets the opportunity to see time on the field?

"Just being a versatile guy that's able to play both tight end positions," he said. "As a tight end, you need to be able to block, that's the important thing, but you also need to be able to catch passes and run routes. Being able to do both is what will make me stand out."