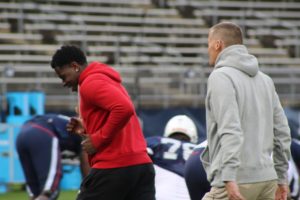 RB Kevin Mensah met with HC Randy Edsall during pre-game warmups ahead of the spring game in April.

News broke Friday that former South Carolina running back David Williams would not be enrolling as a graduate student at UConn for the 2017 season. With the departure of would-be senior Ron Johnson in the spring, the Huskies were already thin when it came to experience level at the position and Williams was thought to be a bridge between senior Arkeel Newsome and two talented redshirt freshmen, Nate Hopkins and Ja'Kevious Vickers. Both shined in the spring game and had stellar performances with the look team in 2016 and with just Newsome and redshirt junior Jason Thompson, who has a grand total of 3 carries for 20 yards in his career returning, experience, despite the young talent is certainly a potential weakness at the position.

Leave it to the new staff and head coach Randy Edsall to find a way to fill some holes. Throughout the spring and even after the conclusion of the spring game, Edsall was adamant that the roster would not be the same come August 31st when the Huskies take the field against Holy Cross. True to his word, in comes a former 2017 running back recruit who reclassified to 2018 and is now set to join the Huskies as a member of the 2017 recruiting class, Kevin Mensah. Confused? Imagine how he feels.

The long and winding recruiting road for Mensah fits in parallel for his experiences throughout high school, which have been the opposite of a normal experience for an athlete trying to showcase his talents on the field for colleges across the country. A battle with the Massachusetts Interscholastic Athletic Association a year ago caused him to miss critical time on the field in 2016. It stemmed from a dispute between his former school, Holy Name Central Catholic (Worcester, MA) and his new one at Shepherd Hill Regional (Dudley, MA). Holy Name refused to sign paperwork that would allow Mensah to play at his new school, which put a scholarship offer for 2017 at risk. Things eventually worked out, as he returned to the field after missing two games early in the year. But with signing day having come and gone, Mensah looked for a fresh start and settled on St. Thomas More in Oakdale, CT.

Since that time, bigger and bigger names were reaching out. Hovering around Mensah were the likes of Michigan, Pitt and Boston College. In April, he was on hand at Pratt & Whitney Stadium at Rentschler Field for the spring game. There he met one-on-one with Edsall during pre-game warm-ups and it was clear he was a prospect who stood out to the staff. Mensah felt the same sentiment, which he described again on Friday night.

"Coach Edsall and his staff have been recruiting me since January," he said on Saturday. "They've been looking at me over my last two quarters of high school. Once I was cleared, got the good grades and had the right classes completed, Coach Edsall told me to come to campus. That was about two weeks ago. We talked, he told me how much he loves my game, gave me an offer and I took it."

A clear sense of relief could be heard in his voice, as the long recruiting process and the hoops he needed to jump through, were finally over.

"It feels good," he exclaimed. "A lot of things that were maybe weighing me down are now gone. I can actually do things and be happy about it. I don't need to be worried anymore and those around me don't need to worry. It's a win-win."

Mensah will report on July 27th and will join the Huskies for the upcoming season. He's a talented player who does recognize the talent already on campus, exactly what he witnessed on the field that Friday night in April.

"I'm excited," he said. "I know UConn has a lot of good running backs there. It's great to have an opportunity to come in and compete, but at the same time, there are guys there that know the playbook already. It's going to be tough, but I can't wait to get in and compete."

"I'm just going to keep working," he said. "If I get a chance to play I'm going to try my best to be an impact on the team. If Coach decides to redshirt me, I'm still going to learn the playbook, still have an impact through practice and learning the quick system that [OC] Coach Lashlee is putting in. I'm just going to try my best at everything. I'm hoping we can bond together and build as a team. From the seniors all the way to the freshmen, if we can build as a team, we'll be able to get things going."

In addition to the relationship Mensah was able to build with Edsall, Lashlee was another clear draw for the talented back who ran for 1,518 yards and 14 touchdowns in his last full season at Holy Name.

"I love a fast offense like that," he said. "Him coming from Auburn and having a huge experience in the SEC, that's going to be crazy."

It's clear Mensah is more than appreciative for what Edsall did for him with this offer and will look to do his part to return the favor.

"When this opportunity came about, I took it because UConn has been there for me," he said. "I love everything there and feel like it is the best place for me."