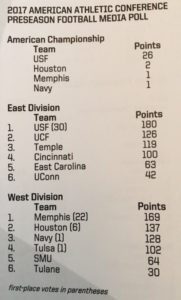 The disrespect thrown UConn's way during the offseason leading into the 2017 college football season continued this morning in Newport as the AAC media projected the Huskies to finish 6th, dead last, in the East Division. Only Tulane received less votes. The slight adds to the total wins projection (3.5) by Vegas and the 114th preseason ranking given to the program by CBS Sports. I'll continue to maintain that this is a bowl team in 2017.

The Huskies week two opponent, USF, under the new leadership of Charlie Strong, is almost the unanimous favorite to not just win the East, but the entire league, capturing 26 of the possible 30 votes as the projected conference championship game winner.

Memphis, who comes to The Rent on Friday, October 6th in front of a national TV audience on ESPN, is the overwhelming favorite out west.

Another underrated team in the preseason poll is Tulsa, who should be on the outside, looking-in, in the national Top 25 poll and was picked 4th in the West, behind Memphis and two teams replacing their quarterbacks, Houston and Navy, perhaps a sign that the league in 2017 will be stronger than originally thought.

Perhaps the surprise in the East is UCF, who's projected to finish 2nd in the East.

Commissioner Mike Aresco will be at the podium at 9AM to kick things off here in Newport, prior to breakout sessions with players and coaches throughout the morning. Head Coach Randy Edsall will also be joining emcee Verne Lundquist later this morning.