The old saying, time flies when you’re having fun applies to every senior college football player across the nation. For Luke Carrezola, his fourth year in Storrs is already here and as he described at AAC Media Day in Newport last week, he wouldn’t have wanted it any other way.

“It’s hitting me slowly,” Carrezola said. “I made the best decision of my life coming to the University of Connecticut. The time has just flown by and I feel like I got here yesterday, but I’m ready to make this senior season mean something.”

Carrezola arrived under new leadership and was a sophomore during the Huskies last bowl game appearance. His junior year was supposed to be the next step in the process, but things did not go according to plan. Enter head coach Randy Edsall, a new defensive system and there’s another new feel surrounding the program. Despite the 3-9 record in 2016, Carrezola had a strong year, especially when he was asked to play multiple roles as both an outside linebacker and defensive end. His efforts accounted for 11 tackles-for-loss (TFL’s) on the year, including an impressive back-to-back, which included a sack during the Huskies emotional week two comeback on the road at Navy, that fell just short.

“Knowing what my job was every single play allowed me to have an impact,” he said. “I hope to do that again this year. Whenever you make a TFL, it’s exciting and can change the game.”

The Langhorne, PA native should excel in his role in 2017 as it’s going to allow him to do what he does best, get after the quarterback. As the defensive scheme shifts to the highly publicized 3-3-5, Carrezola’s role will no longer see him line up over the slot, as he did at times a season ago.

“I’m going to have my hand down pretty much all the time now,” Carrezola confirmed. “I was an outside linebacker in the old system and now I’m a true defensive end. In this defense, for me personally, I’ll be able to produce more explosive plays.”

His pass rushing ability stands out on film and is certainly an asset the Huskies should be able to utilize. It’s also something he’s looked to fine tune throughout the offeseason.

“I’ve been working a lot on pass rushes with guys and going through all the new drills we received from our defensive coaches,” Carrezola said. “I also focused on learning the system inside and out to fully understand what my role is. A smarter player is a better player.” 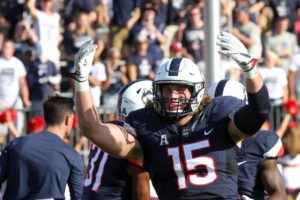 If asked to name an emotional leader on the field on the defensive side of the ball, Carrezola is the first name that would come to mind. There he was in Newport, chosen to represent the team in a leadership role again, but this time, in a different capacity.

“It’s definitely an honor,” he responded when asked what it meant to him to be chosen by coach Edsall. “Being here with Tommy [Myers] and Junior [Joseph], two other great guys to represent the team, whenever I can, I will and I’ll do that to the best of my ability.”

As we looked toward the 2017 season, Carrezola was firm on what he wants the story of his final year in Storrs to be.

“I want this to be the real turnaround of UConn football,” he confidently responded. “Just to have a successful winning season would be huge to me and this team. Being successful with these group of guys would mean the world to me because I’ve been through so much with them. I want to have UConn football not just be what it was when Coach Edsall was here before, but even better.”

Comments Off on Carrezola Ready For An Explosive 2017