When you get a chance to sit down with senior LB Cam Stapleton, the confidence he possesses comes across immediately; confidence in himself, confidence in those around him. On what was his last media day in a UConn uniform, he was no different, but he also did a little reflecting as he recognized this is his final year.

“It’s bittersweet,” he responded when asked how it felt to start training camp. “Going into my last season, I’m very happy to be back in camp, back in football, but it’s potentially the last one. Definitely bittersweet, but very excited for this season. With a new coaching staff, new attack plan, everyone is excited for this and we can’t wait to start and get rolling. We just want the season to be here already.”

As is the case with Junior Joseph, linebacker coach Jon Wholley helped recruit Stapleton to Storrs, who redshirted in 2013. The Staten Island native acknowledges it’s been a wild ride, but wouldn’t change anything about the entire experience, which has now come full circle.

“UConn has meant a lot, especially coming from New York City,” he said. “It’s somewhere that I call home. After all these years, it’s just been special with everyone I’ve met, friends, most of these guys I call brothers. It’s been an amazing experience, definitely very happy to have come here. It’s close to home so family and friends could come up and visit, which has added to it. It’s been a rocky ride, but I’m definitely going to leave this ride on a good note.”

With the change in defensive systems, Stapleton finds himself, like others, in a different role than a year ago. At times, he lined up with his hand down as a defensive end in 2016. That won’t be the case this year.

“My hand won’t be in the dirt as much as it previously was,” he confirmed. “There’s going to be a lot of attacking the quarterback from the linebacker depth. Playing runs from a different depth than I’ve been used to until now. It’s a different transition, but I’m very happy about it and excited because of it.”

With that change, Stapleton is going to turn his attention to building off his understanding of the defense from the spring. While that was a good start, camp provides the opportunity for him to learn more and gain a comfort level that is important for his own individual success.

“I just want to learn the defense like the back of my hand,” he said. “We started in the spring with a new defense and it went well. I just want to learn more so I can move fast. That’s the biggest thing, when I start getting confused, that’s when I start slowing down, so moving fast and putting myself in position to be able to attack every play, non-stop with great conditioning is where I want to be. As a team, I feel like we are going to get where we want to be by executing every play. The more pluses you have, the better the game is. Once you eliminate those minuses, we are going to start winning games and that’s going to lead us throughout the season.”

Then came the confidence.

“Being at a different level of the defense, I’ll also be able to pass drop,” he said with a smile, knowing what was coming next. “I’m trying to catch a couple picks this year, maybe take one to the house, dive into the student section.” 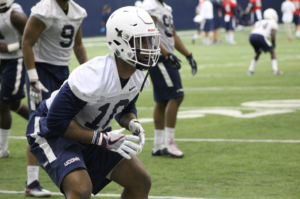 And then came the full out swagger. How would he define success this season?

“Success for me?” he asked before responding. “Championship. I don’t see any reason why we can’t go there, why we should be out of it. I feel like we have enough talent and athletes on the team to do that. We are going to work as hard as we possibly can because we know we can accomplish great things if we do.”

Leadership will be a top priority if the Huskies are going to fulfill any of their goals for the year. Defensively, they are not short of senior leaders. Projecting out the depth chart, nine of the eleven starters on August 31st will be seniors. Not only do the Huskies have proven and talented experience across the board up front and on the outside, but if the younger and less experienced safeties who replace the loss of Andrew Adams and Obi Melifonwu over the last two years develop, the sky truly is the limit with this unit. The linebackers, including Cam will be a major part of that leadership group and he recognizes that is the case.

“Yes, I would say us [Junior (Joseph), Vontae (Diggs), myself], Foley (Fatukasi), Cole (Ormsby), Luke (Carrezola), Jamar (Summers), especially being seniors, we have to be leaders,” he said. “The younger guys look up to us. There is a lot of potential from the younger players on the team that we need to pull out of them. We need every man here, but us as seniors need to be the leaders of the team.”

The players are well aware of where they were projected to finish by the media in Newport. They laugh when they hear it and Cam was no exception, knowing exactly what this team is capable of.

“We’ve always been the underdogs, even when this program went to the Fiesta Bowl,” he said. “It’s something we’ve been given for awhile and then we come out and shock the world like we did against Houston. The talent is going to show itself on the field. People will see it and once we maximize our talent and our optimal potential here during camp, they’ll see. We’re going to shock the world.”

Comments Off on LB Cam Stapleton, Confident As Ever, Ready For New Role Defensively