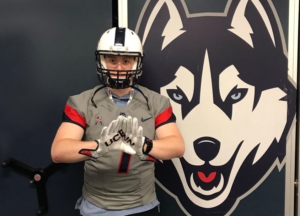 With injury always comes opportunity and in this instance, opportunity arises for Santana Sterling, a junior college transfer linebacker out of Arizona, who played the last two seasons at Mesa Community College and committed to UConn football a week ago. His arrival is sparked by the injury suffered in the spring on a non-contact play by E.J. Levenberry, another transfer who came from Florida State and was a major piece of the Huskies linebacking corps. Levenberry is an unfortunate loss of not just a great football player on the field, but leader and person off it.

The situation caused the staff to look elsewhere for some help in 2017 and while Sterling's arrival doesn't necessarily mean the end of Levenberry's chances to return to the field this season, he will help stabilize a position that was viewed as a question mark heading into training camp. Outside of Junior Joseph, Vontae Diggs and Cam Stapleton who have each played a meaningful chunk of time, only Chris Britton has seen action. Talking with Sterling, who had just departed work on Friday night and was ready to begin a late workout, it's clear the Huskies are getting a hard worker, who was on campus June 21st and 22nd.

"The coaches just told me to come out and visit and when I was there I felt they were very genuine," Sterling said over the phone. "The scheme is a perfect fit for me and a perfect opportunity. They had an unfortunate event where one of their top LB's went down with a knee injury in the spring, so they needed a backer to come in. I felt it was a great fit and a perfect place for me."

Sterling was clearly impressed with the Huskies' facility and for anyone that's been through the complex, it's hard not to imagine why.

"I liked it a lot and it has a lot to offer," he said. "The program treats the players well in terms of helping with equipment and then physically, in the weight room, the strength coach, trainers, they have everything to help you succeed. It's a little different from out here in the desert, I liked all the greenery and the buildings. It was perfect."

The 6' 2" linebacker will arrive in Connecticut on July 25th with two years to play three. He is also eligible to play this season, following a 105-tackle campaign at Mesa a season ago.

"I'm a very physical guy," he said in response to the tackle total in 2016. "I'll go up and hit you in the mouth, don't really care how big or small you are, if you're in my way, you're going to get hit. That's mentality number one. Number two, I'm very smart in the game. Just like anybody that wants to perfect their craft, I'm always working, not just on the field. I work in the weight room and in the film room. I'm a really big film watcher. I can call out plays before they happen most of the time. I know certain formations, certain motions are going to bring out what type of runs or passes. Just being smart in the classroom and on the field helps my ability to make plays. I can see things before they happen and that's really good when you're a linebacker because you just need to let your instincts take over when the ball is snapped and just go ahead and do it."

Sterling has had a long road to UConn and it's a unique story that goes back to Hamilton High School in Chandler, Arizona where he and his twin brother, Levi, led their team to state each of their four seasons, taking home two state titles. From there, they both moved on together to Arizona State where Levi still is. Santana left the program after a grayshirt year and headed to Mesa, but it was an experience that paved the way for his future.

"It was great, just getting in with a D-1 program, I realized it's a man's game," he said of his time with the Sun Devils. "You really need to grow up, suck it up and put your head down and grind. It really is just a grind and more of a mentality that once you beat yourself mentally, then you are defeated and in a hole. That helped build me mentally and also to grow up a bit. It made me more of a man and really helped me progress in my football career. It carried on over to JUCO, which is a totally different and new struggle."

At UConn, he will be coached by Jon Wholley, who's energy and passion keep his players locked in at all times, even on the worst days.

"I could feel 100% that he is 100% committed, that he just wants his players to be great," Sterling said of his soon-to-be position coach. "Even the two days I was there, every day he was super excited to be there, loves his job and wants the best for his players and will do everything he can to help his players excel and be the best that they can be. I feel you need a coach, not a best friend, but someone that will push you no matter the circumstances and get the best of you each day. He seems like the perfect coach."

At Mesa, Sterling helped continue his winning ways, leading his team to a 9-2 record, capped with a 48-42 double overtime win in the 'Valley of the Sun' Bowl over Lackawanna College, a familiar name as that was the JUCO home of incoming QB transfer David Pindell. Both players had success that day with Sterling recording a game-high 16 tackles, 2.5 for a loss, including one sack of his now UConn teammate. Pindell threw for 279 yards, 4 TD's, while running for 45 and another score. Sterling has seen success at every level he's played at and hopes to bring that same winning mentality to Storrs.

"Of course, that's the mentality everywhere we go," he said. "You never want to go play a season just to play it. You're grinding in the offseason everyday, waking up everyday, getting workouts in at 6AM, going to do your thing all day, then at night go and grind again. Then you wake up and it's the same thing over and over again. You're always going to strive to be the best you can. You're not going to get there if you don't expect to win. I expect to win, expect to do my best on the field. Obviously you aren't going to win every game, but you do your best and put yourself in a good position, the best position to give yourself a shot every game. I'll definitely be bringing that mentality up to Connecticut with me for sure."