At the close of the 2016 season, if one looked ahead to this year’s UConn defense, the linebacker corps would have stood out as the most talented, experienced and perhaps deepest unit for new defensive coordinator Billy Crocker. Slowly, that experience and depth has gone away and that brings serious question marks to that side of the football, as the Huskies are already young on the back end.

In the spring, senior E.J. Levenberry suffered a serious knee injury (ACL) that saw him miss the majority of spring, all of training camp and that will extend to at least the first part of the regular season. He’s working every day at the facility to try to work his way back in the lineup, but his status remains uncertain post week six. Then came the first open practice of camp on Monday and there was senior Vontae Diggs with a brace on his left leg, a non-participant who later confirmed he was scheduled for a procedure on his knee this past Thursday. That bad news is something the team cannot afford much more of, as defensively, the projected first unit has played a lot over the last three years, but behind them, youth and inexperience await.

As practice continued on Monday and the team began 11-om-11 work, another interesting development was seen rather quickly. Earlier in the week, I shared the secondary saw a few shakeups with true freshmen getting a shot with the one’s at safety, but the same held true at linebacker. On the first unit, surprisingly senior Cam Stapleton was not on the field, instead there was true freshmen Ian Swenson, recruited as a defensive back, playing outside linebacker in the 3-3-5 system. At least on Monday, the top line linebackers consisted of senior Junior Joseph, who was flanked by Swenson to his left and redshirt junior Chris Britton to his right.

Talking with Britton after practice, he echoed some of what head coach Randy Edsall would share, when the coach said he wasn’t happy with some of the effort he had seen to this point in camp, which is why he shook-up the first team.

“I felt like we came out kind of rocky, a little slow,” Britton confirmed on Monday when summarizing training camp. “We are starting to get in the swing of things. Good thing is, we have a couple more weeks until game one. We have a lot more work to do, but we’re going to get there.”

While Swenson’s addition to the first team may have been partly because of the message Edsall was trying to send, Britton shared some things about Swenson’s progress which will only help the Huskies as players get healthy.

“He’s been out here working hard,” Britton said of the Wilmette, IL native who chose the Huskies over Iowa State and also had an offer from Louisville. “He’s earning himself a role, a great young player. He has a lot of energy, runs downhill and brings the thumper.”

If Swenson can develop and develop quickly into a contributor with the linebackers, that would go a long way to replacing the loss of Levenberry and perhaps Diggs at the start of 2017. Speaking of Diggs, he also met with the media post-practice to discuss his injury and what the expectations are with his recovery. 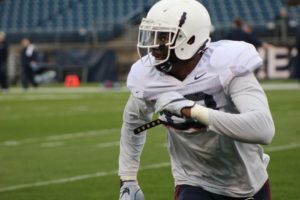 “I have a grade-two MCL tear,” Diggs said. “I’m feeling better than I was when it first happened and am taking things day-by-day. Whatever happens, happens.”

Despite that mentality, Diggs is not even thinking for a second about a lost season.

“I am a true senior this year, so I do have a redshirt as an option, but we aren’t even thinking about that, that’s the last thing on my mind right now,” he said. “Right now, it’s get in there, rehab, get a scope this week and I’ll be back as soon as possible. I’m just going ahead, getting in the playbook, learning the defense and helping both the younger and older guys.”

Part of that assistance is lending vocal support to his teammates, as Diggs was animated throughout all of practice from the sidelines.

“The way we practice, guys do get tired,” he said. “If I’m on the sideline, the best thing I can do is use my voice and I’m going to do that to the best of my ability.”

With Diggs’ loss, Britton and Joseph become the leaders of the second level, as does Stapleton, who I wouldn’t count out just yet. One practice and message sent doesn’t indicate he’s lost a role with the first unit after only a week of camp. With the second open practice scheduled for tomorrow afternoon, it will be interesting to see if freshmen are still seeing action with the one’s, or if upperclassmen have fought to regain their place in the lineup on the defensive side of the ball.

Either way, Britton, who had a tackle in five games a season ago and also forced a fumble, seems to be penciled in with the starting unit at LB and his development has been dramatic from where he was just two years ago. Despite that, he’s still hungry to get even better, which is a sentiment that seems to be shared by all within the program.

Comments Off on LB Chris Britton Continues Development, Now Prime For Key Role in 2017, As Unit Takes Another Hit