The UConn football offensive line has been a group that has received the brunt of criticism from the fanbase in recent years, some justified, some not. Performance has lacked at times, but the main culprit over the last two seasons has been injuries, with two of the mainstays, Ryan Crozier and Tommy Hopkins, missing significant time. Strides, however, were still made in 2016 and entering this year, the talent that has been recruited and molded is ready to make the next step and showcase what they can do on the big stage.

Those reinforcements will likely come from young and inexperienced players, as two redshirt freshmen, Cam DeGeorge and Nino Leone could crack the top of the depth chart for the season opener following the graduation of Richard Levy and Andreas Knappe. How they integrate into a rather experienced remainder of the line will ultimately determine how much progress is made. There will be young and old across the front and two of the leaders, redshirt junior center Ryan Crozier and redshirt sophomore left tackle Matt Peart sat down at UConn Media Day to discuss the unit, their individual development and the expectations entering the season in a new offense.

“Our first goal as an offensive line is to be together as a whole,” Peart said last Friday in Storrs. “As a whole offense, we want to make sure we execute and have a lot less errors. I’m excited to get back in the swing of things and looking forward to working with the best five guys that we have.”

Peart made his debut as a redshirt freshman last year, started all twelve games at left tackle and left several NFL scouts who frequently visited practice drooling at the potential. There were growing pains, but his natural talent and instincts began to take over as he gained more experience throughout the year. He should be even better in 2017 and has been working all offseason to improve.

“Individually, I’ve learned to think less,” he said. “More-so trust that the way that I practice prepares me for any scrimmage or game that I go into. I’m able to understand what it takes to perform at the collegiate level, making time for film, doing extra work and developing quicker footwork here and there. I feel like I’ve gained a lot more knowledge on what it takes to be a college football player.”

With the new offense in place, he and the rest of the offensive line needed to learn a new system that came with different responsibilities. The spring saw the implementation of that philosophy and it gave the unit plenty of time to learn and get comfortable.

“I felt more confident, more solid with my footing and what to expect in this offense as the spring went on,” Peart confirmed. “When we first put it in, it hit us kind of hard with the tempo, but I feel we got accustomed to what’s expected of us. Throughout the offseason, I focused on my overall conditioning to get that much faster. Definitely worked on my assets and first step as well.” 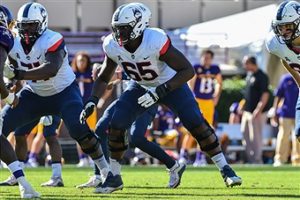 He’s also learning under the leader of the line, Ryan Crozier. The redshirt senior, who missed the entire 2015 season with a major knee injury and was also out throughout this spring, is fully healthy and ready to go.

“I haven’t had any snaps with this new coaching staff, haven’t played football since the Tulane game, so just getting my technique and fundamentals down is my focus during camp,” Crozier said at media day last Friday. “I’m excited to go out there, show the staff what I can do personally and just lead this offense.”

Being at the center of the line, he is the leader by default, but judging by the interactions of Peart, Crozier and Tommy Hopkins, who was flanked to his left throughout the interview, it’s clear who the unit turns to for guidance. It’s taken time for him to develop into that role, but Crozier recognizes others turn to him and also wishes he did more earlier in his career in that department.

“That would be me,” Crozier confirmed, when asked who the leader of the unit was as Peart pointed to him as well. “I’ve been fortunate to be around so many guys since I came here, just looking at what they used to do and molding myself around that. Last year I took on more of a leadership role, me and Andreas [Knappe], since Tommy [Hopkins] got hurt. Back in my true freshmen year when I was starting, I didn’t think I could say anything because I was just a young guy. Looking back on it, I should’ve said more and maybe we would’ve been more successful. Now I’m just being a leader everyday and trying to build those leadership qualities.”

Crozier will also be more vocal at the line this season. That’s one responsibility that gets added in this new style of offense.

“Last year we huddled, so when I was jogging to the line I could tell if it was 3-down, 4-down, where the Mike was and the calls were made,” he said. “Now that we are going straight on the ball and we’re going, it’s just got to be quicker, thinking on the fly, letting everyone know what to do. We just need to be quicker with that. It’s more me and the guards making calls and giving direction. Last year I wouldn’t have to call the Mike, that was the quarterback, but this year I’ll call the Mike and let the quarterback know if it’s odd or even.”

One key for the season will be how the offense began camp as practice got underway a week ago. Did they continue where they left off in the spring, or did performance take a step back? Crozier and Peart both recognized the importance of building off of a successful spring game. It’s paramount that it carries over to the season as after the opener against Holy Cross, the Huskies will be tested in week two at home against potentially their toughest opponent on the schedule, preseason No. 21 and projected AAC champion, USF. 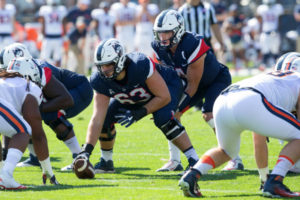 One area that the line won’t need any help in is focus, as new offensive line coach J.B. Grimes will provide the vocal support.

“How would I describe Coach Grimes?” Crozier responded when asked about his position coach. “He’s a great coach. He’s real fiery, has a sense of humor too and cares about all of us so much. He’s going to strain us on the field, but he’s going to love us off it.”

There is also clear camaraderie with the unit, who is loose, and renewed, with goals front and center.

“I love these guys,” Peart said, looking at both Crozier and Hopkins. “They’re like my big brothers. Always looking out for me and I’m always looking out for them. I just can’t wait to get out on the field, back to what we love to do. Our focus is on accomplishing our goals and getting to where we want to be. As a team, that’s winning our division. We want that championship.”