The implementation of a new offense takes time. Under offensive coordinator Rhett Lashlee, the Huskies got a head start on the new system in the spring and the progress from the opening practice to the spring game was dramatic. Inside the unit, each player progresses at a different pace and for one key member of the receiving corps, he’s picked up at the start of training camp right where he left off at the end of April.

That’s Glastonbury native and redshirt freshman Keyion Dixon, who has anxiously waited his turn to step foot on the field of his state university. Dixon possesses length, height and speed, something that quickly separated him when setting foot on campus from other players. He sat out all of 2016, which helped him develop both on and off the football field and even picked up MVP of last year’s scout team offense in the process.

“I think it helped my confidence,” Dixon said after practice on Monday. “Going in as a freshman, not really knowing college or what it’s like and having guys like Noel [Thomas], Hergy [Mayala] and Brian Lemelle help you out to understand the game of football at this level, it’s high paced, physical, so they helped me understand that. When I finally got the hang of it, I was on a role, so I feel like going into this season with that under my belt, I’m more confident in my ability, knowing what I can do, focusing on that, executing and catching the ball better.”

He’s one of several players on offense who redshirted last year and should see significant time in 2017. Dixon is pleased with how the offense has performed now that camp has gotten underway.

“Going back to the first week in spring, we were all learning the new offense,” he said. “Now, the first week of camp, I thought we were all coming together faster than the spring because we were focused and more excited to get closer to the season. Everyone started to execute a little more and we know there’s more at stake now than the spring, so everyone is focused in.”

He also indicated on a personal level, he feels good about his development in the offense and is satisfied with his own start to camp.

“I really am,” Dixon responded. “I feel like I’m getting the offense. More effort is always required because we are always trying to get better, but I’m understanding the offense, knowing where I have to be and what I have to do to help the offense move in the right direction, so that’s really a plus for me.” 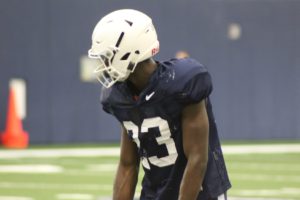 Not knowing who will be the starting quarterback come the season opener is a tricky thing for receivers, as the passing game relies a lot on the timing between quarterback and receiver. However, the receiving corp is taking things in stride, working to execute no matter who is under center.

As the conversation went on, it became clear that Dixon has grown up quickly in his short time at UConn. There are leadership qualities already showing through, including helping the young guys like true freshmen Cam Hairston and Garrison Burnett get better each day.

“I feel like it’s more of an adjustment for them in the route running and timing with the quarterback,” he said. “In high school you can go out there, run a go route and throw it up, but now we’re focused on their fundamentals and how they can get better, in and out of their breaks and watching the ball into their hands. We coach them up in the receiving room and on the field so they can work on and elevate their game so it can fit the speed of this offense.”

Not quite the leader of the unit, however, Dixon turns to the elder-statesman in the group for that.

“I definitely know it’s Hergy,” Dixon said. “Being the older guy and having the game experience under his belt, he’s always telling us to get some work in, that we need to get better each and every day. Hergy is always with us, moving the group forward and helping us out. Whenever we don’t know something, we can go to him because he’s always locked in and serious.”

With two more weeks of camp before game-week, things are getting serious on the practice field. the energy and excitement for a new season under a new staff, has not changed however.

“We are working to get better for the season, all focused, all energetic, excited to get this new season underway under a new coaching staff,” Dixon said. “Everyone is excited and happy. We’ve been working hard to focus on execution, playing more aggressively and I think it’s very effective. We’re definitely all on board.”