For the second consecutive game, defensive woes hurt the Huskies, but this time UConn was not able to overcome an early deficit as Virginia exploited match-up problems and breakdowns on that side of the football. Head coach Randy Edsall touched on the issues after the game, especially when it came to defensive communication, most notably in the secondary.

“The communication’s not good,” Edsall put it simply at Scott Stadium following the loss.

One play in particular clearly portrays the issues facing the Huskies secondary. With the score 31-12 in the fourth, Virginia QB Kurt Benkert connected with receiver Andre Levrone for 73-yards, the Cavaliers final score of the game. So what happened? Let’s take a look.

The focus will be on what is circled below as CB Jamar Summers is playing man coverage on the bottom of the picture [noted outside the circle]. On the two inside guys, the Huskies show man coverage with both Ian Swenson and Marshe’ Terry. You will also notice LB Vontae Diggs is shaded over, much like Chris Britton up top with the slot receiver to the right. 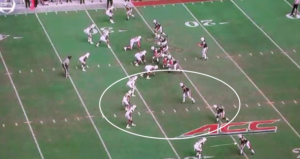 The following shows the routes that will be run and who each defender eventually runs with: 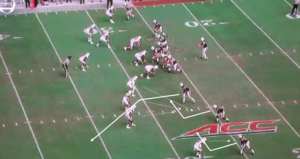 At the snap, Swenson chips Levrone and then appears to pass him off to Terry, taking the underneath crossing route with help from Diggs. Terry, however, chooses to stick with who he lined up across from, also going with the underneath route: 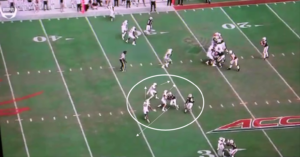 This leaves Levrone running free and Benkert does not miss, as you see here in a slowed-down version of the play:

Whether Terry or Swenson are at fault for this coverage lapse, the lack of pre-snap communication and execution of individual responsibilities is how this scenario played out. It’s why Edsall has been preaching ‘Do Your Job’ since training camp and he touched on it again during today’s AAC Teleconference. Following the game, he also pointed out the inexperience on the Huskies back end.

“There are some young guys back there in the secondary,” Edsall said. “I’ve got to find a way to get them to have a little bit more confidence. That’s one thing. If you’re a defensive back, you’ve got to think you’re pretty good. You have to play with a little bit of swagger. Having coached that position for many years, you can’t play timid back there. You can’t play scared, but you’ve got to be technically sound. Some of those things aren’t happening. As I told them at halftime, I think there are some guys back there playing on their heels. You can’t play on your heels back there.”

Another issue that allowed Virginia to have sustained drive after sustained drive is the lack of playmaking by the defense and it’s not just turnovers. The Huskies currently rank 126th nationally in tackle for loss (TFL’s) per game at just three. This keeps opponents ahead of the chains and puts them in third and manageable situations. On Saturday, the Wahoos converted on 7-of-12 third downs. In the five situations where they did not convert on third, UVA went for it on fourth three times, converting another two. Edsall again was not pleased.

“It is one of those situations where early in the game we had some issues that haunted us in the first game,” he said. “Not being able to get off the field on third down is something that kept drives going in the first half there and couldn’t make a play. It’s just one of those things that we’re going to have to work through and continue to get better and keep stressing all of the little things that you have to do in order to be able to win and most especially to be able to go on the road and win here against an ACC opponent.”

Cavaliers head coach Bronco Mendenhall and offensive coordinator Robert Anae recognized they could take advantage of some of the match-ups and confusion in the Huskies secondary and once it started, they never let up. Benkert ended up throwing for a Virginia school record 455-yards, earning him Athlon’s Unsung Hero of the Week award.

“If there is a match-up in our favor and they become more aggressive in playing man and man free coverage, when that happens you just simply look at the match-ups and some of those were in our favor,” Mendenhall said following the game. “It’s one thing to recognize the match-ups and it’s another thing to execute and put the ball where it needs to be, which Kurt Benkert did. And so, again, our offense was multiple, it was hard to defend and pretty complete and so eventually we just became better at identifying where the match-ups were and Kurt and the receivers took advantage of that.”

Now it’s up to the Huskies to adjust and limit the opportunities they give East Carolina next week.

“There are some things that I think schematically we’ll do to help ourselves and to help them, but the lack of communication, the miscommunication that takes place will lead to those plays,” Edsall said. “That’s the stuff that’s got to stop. It’s my job as a head coach to get those things straightened out and to get those guys to understand.”

The Huskies have an extra day to get things sorted out before conference play begins on Sunday. Edsall has been down this road before and if history is any indication, adjustments should take hold well in advance.

Comments Off on After Virginia Set School Passing Record, Huskies Staff Has Work To Do