Cancer. Consisting of just six letters, it’s a word that carries more weight with it than any other in the English language. For anyone that has to go through this, it can be very difficult for the patient and their loved ones too. Although this may be a scary thought, especially after your diagnosis, many people who have cancer are recommended to look into finding cheap life insurance quotes. This is so you can take back control of your life and know that if anything was to happen to you, your family will be protected no matter what. This would be a good move to make. For Wes Long, bothersome leg pain was just the beginning. It started while his wife, Drew, was pregnant with their first child and that pain became more and more of a problem as she gave birth to their son, Wesley Long III on November 6, 2017.

With some available time off shortly after the birth, Wes scheduled a doctor’s appointment as he started to notice lumps on his pelvis, which coincided with the beginning of a loss of range of motion in his left leg. The visit led to an analysis of his blood, which revealed an unusually high white blood cell count, creating concern even before a biopsy was completed.

Just two weeks after the birth of their child, more tests revealed the worst. The diagnosis?

“Leukemia came first,” Wes told his family and friends in early December. “That caused a mutation in my stem cells so they couldn’t produce enough mature T-cells. Because they weren’t mature enough, they couldn’t fight off Lymphoma, so I developed Lymphoma, as well.”

His treatment is an aggressive one.

Doctors are first attacking the Lymphoma here in Connecticut, hoping to put it in remission through an extended and aggressive chemo process, which will see him make four 5-day hospital stays spread out over a two month period. They can then rectify the root cause of the problem, Leukemia.

That process will be done by a stem cell transplant, which will occur down at the Memorial Sloan Kettering Cancer Center in New York City. It will be a ten-to-thirty day process for the transplant itself, which will begin in early March. From there, he will remain in New York at a recovery facility, with the entire process lasting up to three months before he will be able to return home.

The chemo Wes is receiving ultimately leaves his body through his fluids, so even sweat can transfer the chemical that is helping him fight. It’s prevented him from seeing his child for periods of time, something he will also experience when he goes to New York in March. As both father and son continue their evolution, it’s made the situation even more difficult. 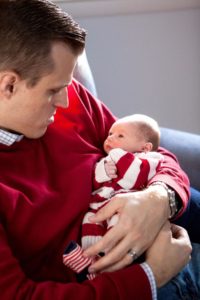 A DISEASE THAT TOUCHES US ALL

Cancer is something that each and every one of us will have to deal with at some point in our lives; whether it’s directly, through a family member or even a friend. Personally, I’ve lost an aunt, an uncle and a grandfather. Cancer sucks and at no point is anyone ready for it, especially at a moment that should be the happiest for a young, growing family.

If there is anything I know about Wes Long, however, it’s he’s a fighter. He’s an athlete, a son, a husband, a new father, a friend and so much more. He’s the quarterback on our flag football team. He’s the shortstop on our summer softball team. He’s an avid enthusiast of space and had an opportunity to work in his home state at the Kennedy Space Center in Cape Canaveral before heading to Connecticut for a new job. That’s how we met and while an alum of UCF, we won’t hold that against him.

A fan of the Miami Dolphins, Wes knows adversity. All kidding aside, he’s one of the friends I know that has the mindset to deal with the situation at hand. Maybe it was from his football days as a high school quarterback in Florida. Maybe it was from having to pick up and start anew with a new career in Connecticut. Maybe it’s his faith.

Wes looks at his life as if he was meant to be in Connecticut at this time, close to the best cancer treatment centers the world has to offer. He’s been creating short videos to document his treatment and share an update for his extended family and friends since he began the fight in early December. In the very first video, he chronicled his life’s journey.

“Someone put in an email how funny it was that life leads you in directions where you don’t know why,” he said. “How can you have possibly known that leaving your entire family in Florida and the Space Center, would be a move that could help save your life? That was an uplifting message. Everything happens for a reason. If I was meant to come to Connecticut because someone was looking out for me, knowing that in a few short years I’d require the expertise that is here, then it makes a lot of sense.”

He recently concluded the third of his four trips to Hartford Hospital for the aggressive chemo treatments.

“Even though the last couple days I didn’t have a lot of energy, I was able to finish,” Wes said on Tuesday. “It’s been difficult and challenging. I’ve come to the realization in the last couple of weeks, how far I’ve been able to come because of all the support I’ve been given.”

There is also more good news. The cancer is not spreading.

QUEST TO HELP OTHERS

If there’s one thing that shows the type of person Wes is, it came in his latest video, where he talked about the research he’s done as he gets closer and closer to the stem cell transplant. In his case, a direct match was not found, so he will receive what he needs through the blood of umbilical cords, a process that is an anonymous donation. His unselfishness, however is noticeable, encouraging others to donate anyway.

“I wish I would have known before, but I’ll never be able to donate blood or be on a donor list,” he said. “I’m going to recover and I’ll be fine, but I won’t be able to help others the way other people are about to help me. I’d really like to use my situation as a soundboard for other people. If your heart feels compelled to, I encourage you to do it.”

A FRIEND IN NEED

Wes is a person who is not someone that asks for help. He is unaware of this article, just as he was unaware that one of our friends set up a Go Fund Me page to assist his family with his medical fund. When he found out, he was absolutely blown away and had a message for those that have helped to date.

“Whether it has been bringing food to the house, prayer, thoughts, the Go Fund Me, even something behind the scenes that I haven’t seen yet, I can’t say thank you enough,” he said. “I know I will fall short with all of the thank you’s, but know that the words of encouragement, prayers, thoughts, I’ve felt them all. It’s been very touching and humbling. I don’t really know how to say thank you for everything.”

Back in early December, Wes ended his first video message with just five words and it seems fitting to do the same here. They have a clear message, portraying his mindset as he set out on the journey to attack the challenge in front of him.

There is a Go Fund Me account set up on Wes’ behalf for his medical fund. If you can donate, send a prayer or even a word of encouragement his way, it will go a long, long way. Anything you can do will be greatly appreciated by him and his family.

Comments Off on A Story of Fight, Life & Survival