Dedication. Emotion. Passion. Three words that describe Luke Carrezola, whose outright love for the game of football was on full display every Saturday for the past four seasons here at UConn. Those four years raced by for the Langhorne, Pennsylvania native, as he now turns his attention from his time with the Huskies and sets his sights on his next chapter, the National Football League.

In a wide-ranging interview, Carrezola highlighted his time at UConn, some of the memories he’ll take away and also discussed what the future may have in store for him. Having taken his final classes in the winter, he’s turned his entire focus towards the game that he’s invested so much in to this point in his life.

“I’m going to continue to play for as long as I can,” he said over the phone on Monday afternoon. “Whenever football ends for me, I’m going to probably get into the coaching world at the college level, become a graduate assistant somewhere and try to spark my whole coaching career, but I’m definitely trying to play as long as possible.”

He doesn’t plan on ending his playing days any time soon and is already fully engaged in preparation for Pro Day at UConn, which is set for March 21st in Storrs. 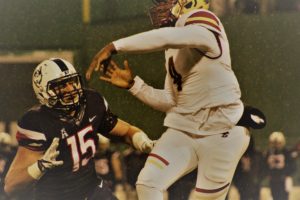 “I’m training right now in Tampa, FL,” he confirmed. “I’m there right now at ASPI Compound Training, where Obi [Melifonwu] trained for his Pro Day and the NFL Combine. I’ve been working with Yo Murphy, the head trainer who played for the Bucs. For my position coaches, I’ve been working with Warren Sapp and Booger McFarland, both obviously big names down here. I love it here. I’m getting better and learning new things every day. Every week I continue to try to get better and get myself ready for a great Pro Day.”

Having the chance to work with Sapp and McFarland is an opportunity to work with two of the NFL’s former best at their respective positions. What are they focusing on with him?

“A lot of it is pass rush,” he said. “In the NFL, so much business is if you can hit the quarterback and get sacks. That’s how you make money. I’m learning a lot more about pass rushing from two really great players. At the same time, I’m still learning the process to run a 40, how to do the other drills that I’ll be doing on Pro Day.”

Carrezola has signed with NA3 Sports for his representation throughout the process and he’s had the chance to pick the brain of an NFL Hall of Famer.

“We had Derrick Brooks come and talk to us, former linebacker with the Bucs,” he said. “He just let us know about how to live your life when you get into the league and how to set yourself up for success in the future. That’s with everything, including relationships with people, whether it’s close friends, family members and how to go on and live your life.”

To date, Carrezola has been contacted by several teams.

“I had the Cowboys text me a few months ago,” he said. “They sent me a personal survey to try to get to know me a little more. The Raiders sent a letter to my high school, trying to get my background information from there and my high school coaches sent letters back to them. I’ve also had a phone conversation with the Redskins.”

Having played for two different staffs at UConn, both with their own NFL experiences, Carrezola has had several mentors to lean on for advice on the process that lies ahead.

“I talked to Coach Edsall a little bit before I left UConn,” he confirmed. “He told me to continue to work and really focus on getting better every day. That’s what I’ve been trying to do. I got to talk to Coach [Vincent] Brown, I also reached out to him. He actually has been talking to my agent, just letting him know and understand the kind of person and player I am. He’s been such a big help and awesome person to have in my life. Being able to have people like that around me, that makes me feel good and more confident in what I do.”

What has the former New England Patriot linebacker, who worked with Carrezola for three years told him?

“He tells me to just be the person I am and attack my work everyday,” he said. “[The NFL], it’s a business. One day, you think you have it all, but always humble yourself and push yourself to consistently get better.”

When asked to reflect back on the most memorable moments during his time in Storrs, he paused briefly. 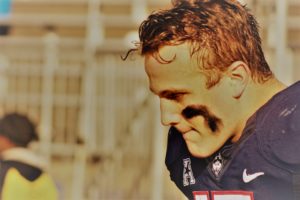 “The biggest things with me were the relationships I’ve made with my teammates and the coaches that came through,” he said. “I think there’s something to be said about my sophomore year, when we went to the St. Petersburg Bowl. That year to me was pretty powerful. To be able to beat undefeated Houston and have that type of energy and that type of feel for UConn, I really felt that place was buzzing during that time.”

“There’s so much to take away from it,” he said. “I went in thinking I was going to be in strength and conditioning, get my degree in that field, but unfortunately that program shut down, so I managed my way to get into Economics. Just really, the people that I met there, a lot of teammates, a lot of coaches, but the university as a whole, I enjoyed my time. I didn’t have much of a social life because the game required you to give up so many things, but as a whole, I was able to better myself academically, that will only help me for my future.”

He ended his academic career by being recognized during the 3.0 Athletic Director’s Honor Roll at Gampel a week ago.

“That was definitely an honor,” he said. “It’s something that I definitely worked for throughout my years at UConn and I feel like I finished academically the right way.”

Having been with Coach Edsall for just one year, Carrezola leaves confident that the Huskies are headed in the right direction under his leadership.

“I think Coach Edsall is doing a good job,” he said. “I think he’s recruiting the guys that fit what they want to do. I saw more competition into the offseason workouts, which is a great thing to have. We did it with Coach Balis for two or three years and I know I personally improved from it a lot. Competition brings out so much. I think Coach Klein, the strength coach is doing a great job developing the kids and I think they are only going to get better and better as the years go by.”

A FUTURE IN COACHING

Despite majoring in Economics, as mentioned, Carrezola has a plan for when his playing days end, coaching.

“I think it just comes from my love of the game,” he said. “I love football so much and being able to play it, study it and have great mentors with different coaches over the years, I can see how they see the game in their eyes, from Coach Dott, Coach Brown, Coach Diaco. I’ve tried to take things from all of them to improve my game. In learning so much about the game, I have such a passion for it that I would want to help and develop other kids in the future. If it’s through a game that I love, teaching and coaching them to live the right way in order to become as successful as possible, that’s definitely something I would want to do later on in life.”

In talking with Carrezola, not just today, but throughout his entire career at UConn, he’s someone that takes the game very seriously, studies and puts in the extra work. His desire to be a coach one day comes from the natural leadership he possesses. Whether it’s the emotion he displays on the field or the extra work he put in with his teammates that no one else saw, he gave everything he had to the program and then some.

“Leadership wise, I just tried to be that player that has that type of edge because you need to play this game with an edge,” he said. “I think you need to possess that inside you, you have to want it bad, think about all the things that got you to that moment. For me, it’s God, my family for sure and how much they sacrificed for me to get to where I was. It just had to come out. You saw it with the passion that I played with throughout the years and the love of the game that allowed me to sell out and represent something much bigger than myself.” 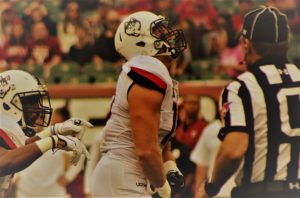 “I really tried to lead for the young guys, I talked about coaching earlier and it’s something I naturally did,” he continued. “I was always in with the younger guys, watching film with them, trying to improve their game because it came natural to me. My brother taught me the game at a young age and I really got it from him. I learned so much from him [Paul Carrezola who was a tight end at Rutgers from 2010-13]. I looked at Connor Freeborn, [Kevin] Murphy, AJ Garson as my little brothers. It’s what I wanted to do for them and for this program.”

A career in coaching can wait, however, as Carrezola has some unfinished business between the lines.

The following video is an inside look into ASPI and the training process that Luke Carrezola is going through in Tampa in preparation for March 21st’s Pro Day at UConn:

Comments Off on With A Love For the Game In Hand, Luke Carrezola Begins Pursuit of the NFL