The trenches. A place where football games are won and lost. Control the line of scrimmage and control the outcome of the majority of games. After losing three multi-year starters across the defensive front, the Huskies were looking for talent once the offseason began. That search consisted of who was returning internally, coming in on the recruiting trail and added through possible transfers, particularly at the graduate transfer level.

In the case of Miami Hurricanes defensive lineman Ryan Fines, UConn didn’t need to go calling; Fines came to them.

“I sent out a lot of emails to various schools around the country, asking for them to give me a chance,” he said over the phone on Friday. “[UConn] responded immediately.”

Fines took notice. Head coach Randy Edsall made it no secret in the spring that the Huskies needed some help up front defensively after Foley Fatukasi, Cole Ormsby and Luke Carrezola each found themselves in NFL camps following April’s draft. In Fines, Edsall finds someone he views as a hard worker, a leader, someone with experience and a guy that can come in and play right away. He and the staffs’ reaction to the email caught the transfers’ attention from the outset.

“From day one, they seemed interested in me and I really appreciated that,” he said.

Once training camp gets underway in August, playing time will be up for grabs. The area that saw him want to leave The ‘U,’ was what drew him to a place like UConn, but it won’t be without competition.

“One of the main points was opportunity,” he said when discussing playing time. “I felt I wasn’t getting a good enough opportunity at Miami, so I was looking elsewhere for that chance.”

Despite not seeing much time down in Coral Gables, his description of the situation revealed he is a team-first guy.

“Not [seeing playing time] was something I needed to live with, but I just put the team first,” he said. “If your goals don’t line up with the team’s goals, that’s fine. Sometimes you need to deal with a situation, which will only help as you try to find your way in the world.”

That attitude will suit him well in Storrs. What will also help him is the experience he received by playing for one of the most recognized programs in all of America. Each practice he was able to challenge himself and improve his game.

“The better competition you play against, the better you become,” he verified. “I was able to learn from some really good players, guys that are in the NFL right now, so I think those are some things I can bring here to help this program.” 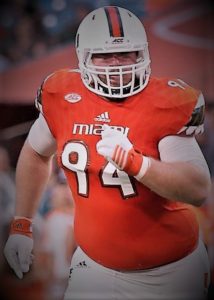 That attitude saw him leave Miami (FL) in good terms, earning praise from head coach Mark Richt, who oversaw the turnaround that saw the Hurricanes win ten games a season ago.

“Ryan and I talked and he feels his best opportunity to get the most playing time would be at another school,” Richt said in January. “Ryan has been a great representative of our program. We appreciate all the hard work he has put in and we wish him all the best in his future plans.”

From his former coach, to his future one, Fines liked what he saw from Edsall during this process.

“First impression? I really like what he is doing here,” he said. “He is very interested in the player’s lives, same thing with [defensive line] Coach Dottin-Carter. Those were the main things I saw when I first came here.”

The way the team interacted with one another didn’t hurt either.

“I really enjoyed these guys,” Fines said. “They are a good group who seem to care for one another, which I really enjoyed. There aren’t any cliques or anything like that. Everyone talks to each other, so I really liked that camaraderie that’s here.”

The university itself also stood out to him.

“It’s a beautiful campus,” he said. “Really good academics. Basically everything I wanted in a school, UConn checked off on the list.”

And Fines knows quality schools. After committing to Miami, the defensive lineman transferred to IMG Academy in Bradenton, FL, which has quickly been termed the ‘Mecca for college football recruiting.’ It’s not extreme to think 50-plus national college recruits are present any given year. It’s an experience that no doubt helped build him into the player he’s become.

At UConn, Fines, who stands 6’3″ 305-lbs, could play any of the three positions along the defensive front. He’s already moved to campus and will get settled in through the summer, before beginning graduate classes in the Fall. Now, it’s all football as he hones in on several main goals leading into the season.

“Become a leader for this team,” he said without hesitation. “I want to show other guys some of the things I’ve learned and what can make the team better. That’s my main goal.”

Long-term, he sees the professional ranks within his reach, with the ultimate goal of reaching the NFL. He’ll see plenty of attention early on as training camp gets underway, but it’s something he’s been used to since his days back at IMG. To see that experience and more about his former home, view the following video: