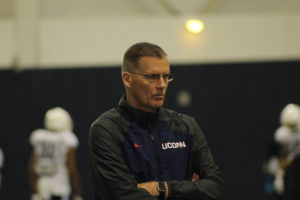 As the start of the 2017 college football calendar quickly approaches, the Draft Advisory Opinion by the Office of State Ethics became public today, which details the recommendation to the following questions surrounding UConn football:

"(1) whether Randy Edsall's 'negotiation' of a job at UConn for his son is permissible under the Code of Ethics'; and (2) whether his son's 'position' with UConn may be as [an] Assistant Football Coach[.]"

The high level summary that is noted at the top of the 24-page recommendation, concludes the following:

"Based on the facts presented, we conclude (1) that, because Randy Edsall was a 'state employee' as of December 28, 2016, the date he and UConn executed a binding and enforceable employment contract, his subsequent negotiations with UConn concerning his son's salary (among other things) were impermissible under General Statutes § 1-84 (c); and (2) that § 1-84 (c) prohibits Randy Edsall's son from being employed by UConn as one of his father's assistant football coaches."

The University of Connecticut believes they have properly conducted themselves under the law, consistent with precedent that has been set within the state for the last thirty years. That's the legal argument they will use to counter the recommendation.

Around the country, this is nothing new. Coaches hiring sons has been and continues to be commonplace. In fact, at the University of Iowa in January, Connecticut native Kirk Ferentz hired his son Brian to be the offensive coordinator for the Hawkeyes. Iowa has a similar law as the state of Connecticut, but no investigation was conducted there. Legendary coaches Joe Paterno, Lou Holtz, Bobby Bowden and Steve Spurrier all have or had sons in the family business and all spent time with their fathers on staffs at Notre Dame, Penn State, South Carolina, Florida and Florida State.

All states, however, have different laws and it will be the proper interpretation of the law here in Connecticut that will ultimately settle things. Shortly after today's opinion was released, I reached out to the Connecticut Ethics Office for comment. Earlier this evening I received a call with the following clarifications.

First, this is far from over. The office stressed this was only an opinion and is just a recommendation to the Ethics Advisory Board. That board will meet on Thursday, July 20th at 1PM to review today's recommendation. The Ethics Advisory Board consists of nine members and they will vote to approve as is, or modify that document, with a majority rule. From reports, UConn will be in attendance to present their side during deliberations and the office confirmed Thursday's session will be open to the public.

Second, when asked for how Connecticut's law differs legally from similar statutes across the country like in Iowa, the office could not immediately say, but more information will be provided on Monday with legal input for a proper response.

Check back for further updates throughout the weekend and as AAC Media Days begin in Newport on Monday.