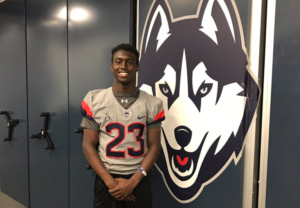 The UConn football staff has been busy on the recruiting trail this summer and with camps rolling on throughout June, it was a perfect opportunity to get to know several recruits on campus in Storrs. Several offers have gone out throughout the month and it's also been a period where the commitment list for the 2018 recruiting class has grown substantially. One of those additions came on June 24th when St. Anthony's (NY) WR Heron Maurisseau decided to make UConn his home for the next 4-5 years.

"When I came to the UConn camp, I felt okay, but as we went on, I started to realize that UConn was more of a family," he said over the phone on Saturday. "Everything was one decision, a togetherness in how they do things."

Specifically, outside of football, Maurisseau was impressed with how the school is focused on the entire student-athlete experience.

"I really like how they would help on an individual basis by providing tutors and the entire academic center was impressive," he said. "Also, the beautiful facilities they have are just phenomenal."

Another positive for the Huskies was the staff themselves. It's clear that over the last six-plus months, they've made inroads not just here in Connecticut, but throughout the entire region. They also quickly made a positive impression on Maurisseau.

"When I went there for my visit, I was expecting something completely different," he said. "When I met them and really got an understanding of who they are, their interpersonal side, as they got to know me, I felt like I was a part of the family right then and there."

At the high school level, Maurisseau is a two-way player, starring at both wide receiver and defensive back. He pulled in four touchdowns as a junior, leading them to a perfect 6-0 league record in the New York Catholic HS Football League in 2016. The Huskies staff and particularly offensive coordinator Rhett Lashlee envision him at one specific position in the new up-tempo, fast-paced offense.

"Based on the meeting that we had, they like me primarily at slot," he said. "But I can also lineup on the outside."

Maurisseau's speed will definitely be a benefit at that position, similar to what fans will see from Quayvon Skanes in 2017. He runs track and put up a 40-time in the 4.5 range and also competes in the 100, 200, and 400-meters.

"I would say my speed is one of my key assets," he confirmed. "You know what they say, speed does kill. When I'm running a route and know that a DB can't cover me just based on their speed, that's a big, big factor. It helps me get down the field and make a couple people miss because of that quickness. It has a huge impact on my performance."

Speed is not the only asset that Maurisseau possesses, however.

"I would say my IQ of the game is a difference maker," he added. "Some of the recruits I've been at schools with, they have everything else, but not the real meaning of the game and how things are supposed to be run."

Despite the strong assets, there are areas of his game he needs to work on, which will be a focal point throughout his senior season at St. Anthony's.

"I'd like to improve on my maturity," Maurisseau said. "My hands need some work, but other than that, communication and understanding of the real gaps of how college really is, in order to play D1 football at a high level.

With no seniors, the Huskies receiving corps entering 2017 is young, but experienced, specifically with juniors Hergy Mayala, Tyraiq Beals and Aaron McLean. Redshirt freshmen Keyion Dixon and Quayvon Skanes should have breakout campaigns this season, which will help solidify the group that should see the ball spread around early and often in the new offensive system. For the longer-term future, 2017 commits Garrison Burnett and Cam Hairston will join the program later this month for training camp and in addition to Maurisseau, Capital Prep's (Hartford, CT) O'Neil Robinson has also committed, which will help bolster the future of the Huskies at receiver. As in year's past, the 2018 class is staying in touch with each other, specifically where they want to take the program in the future. Maurisseau is no different.

"I've been talking with O'Neil Robinson," he said. "We were talking about how great our short experience at UConn was and after we both committed, how big of an impact we are going to put on this team as a 2018 class. We literally cannot wait."