Texas. Where football is king. For UConn football, it’s an area of the country that has seen the Huskies staff flock to on the recruiting front. As conference affiliation saw the Huskies join the likes of SMU and Houston, it was a natural transition that head coach Randy Edsall and his staff have looked to take advantage of.

With Nate Hopkins (Flower Mound), Pierce DeVaughn (Plano), Noel Ofori-Nyadu (Arlington), Zavier Scott (Fort Hood by way of Germany) and Caleb Thomas (Mansfield) all currently under scholarship having played high school ball in the Lone Star State, the program is slowly building a base from perhaps the most talent rich state in the nation.

This past week, another Texan joined the fold, the first of two from Texas to join UConn for the class of 2019 as Jayce Medlock, from powerhouse DeSoto, committed to the Huskies. Medlock noticed the relationship that UConn is building with the state, including RB Darrin Smith, a top ten all-purpose back in America, who was originally the first to join the Huskies for 2019.

“It’s just a blessing right there,” he said of having other Texas alum already on the Huskies roster and continuing to join. “I talked to [OL commit] Chase [Lundt] before he committed [earlier this week]. I didn’t know he was going to commit that day, but I knew he was really interested. And then Darrin [Smith], I’m sure he’s still interested in UConn [despite decommitting].”

Other than the Texas connection, UConn just seems like a natural fit for him.

“I liked the campus and football facilities,” he said. “They brought me to the business school and I felt really comfortable there. They are a top-20 program academically, so that’s big outside of football.”

Academics are of utmost importance to him, displaying that during his commitment letter on social media where he added in his GPA. His approach academically was something that was instilled in him by his parents.

“School before athletics,” he said. “That how my dad raised me. You need to get your education.” 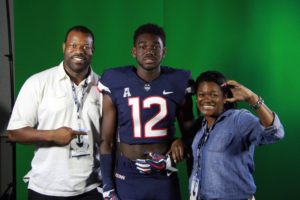 With school being a natural fit for Medlock, how about from a football standpoint?

“I went on my visit and Coach Edsall took me in a room and gave me the exact plan of how they’d use me,” Medlock said.

Standing at 6’3″ 205-lbs, he is a versatile player on offense, playing both wide receiver and tight end. Where did Edsall say he’d be interested in seeing him line up once he gets on campus?

“A little bit of both,” he confirmed. “I can play in the backfield, play out wide or be in the slot. UConn is just a great place to play college football for me.”

Having played wide receiver for the bulk of his playing days before moving to more of a tight end last season, Medlock has naturally strong hands and has the experience to exploit defenders all across the field.

“I’ve been a receiver my whole life, have always trained at that position,” he verified. “So having that background has really allowed me to get to where I am today.”

His highlight video showcases his ability to make an impact all over the field. Lining up wide, in the slot, in the backfield, disengaged on the line and even with his hand down in the natural tight end spot, Medlock can do it all. He runs naturally with quick hips compared to the usual tight end, something the Huskies could certainly utilize in their offense in the short to mid-range passing game.

But perhaps the clip that stood out the most was his role in getting out in front as a lead blocker on a quick wide receiver screen. On the play, Medlock locked onto his defender five yards from the sideline and drove him onto his back, landing four yards off the field of play. That attitude and tenacity is something the program has been missing in recent years.

“That’s something I pride myself in every day, taking on defensive ends and linebackers, now,” he said. “Definitely moving to tight end has helped me get better with that aspect of my game.”

What has also helped him develop as an overall player is transferring into a school with the stature of DeSoto, as he not only gets a chance to compete in Texas 6A football, but also with top talent every day on the practice field.

“When there’s competition, you need to elevate your game too,” he said of the experience playing at DeSoto brings. “Just competing for a spot has helped me get better overall.”

Choosing the Huskies over offers that included Illinois and SMU, Medlock will bring confidence, is a proven winner and is also someone who is striving for greatness. With one year left at DeSoto, he summed up his goals for this year in two words, showcasing that confidence.

He then ended with this.

Watch below for workout clips of Jayce Medlock before he transferred to DeSoto from Lancaster High School:

Comments Off on From Texas To Connecticut, Jayce Medlock Will Be A Weapon Offensively