One of the main focuses on the recruiting trail thus far for the new UConn football staff while filling out the class of 2017 has been the secondary. With the loss of Obi Melifonwu and Andrew Adams over the last two years, as well as multi-year starter in CB Jhavon Williams, UConn will need to find stability at three and now four key positions in the new 3-3-5 defensive scheme that new DC Billy Crocker will be implementing in Storrs.

Returning is three-year starter Jamar Summers at one CB spot, as well as Vanderbilt and former 4-star Florida commit in transfer CB Tre Bell, who is now eligible to play and figures to be a key piece in the UConn secondary in 2017, after an impressive year serving on the look/scout team. There is also a lot of young talent on the current Huskies roster in safeties Brice McAllister, Anthony Watkins, Aaron Garland, Marshe Terry and Eddie Hahn, as well as CB's John Robinson IV, Tyler Coyle and Tahj Herring-Wilson. That has not stopped the staff from zeroing in on some perhaps key pieces to the UConn football future. Omar Fortt is a safety who was already poised to enroll early for the Huskies and new head coach Randy Edsall came through on that commitment on behalf of the university as he enrolled a week ago. At least five of the now 17 commits in the class were recruited for the secondary, including Brayden Brown, who committed to the program earlier this week.

Brown was an original commit to Coastal Carolina, but made the move after visiting Storrs this past weekend. 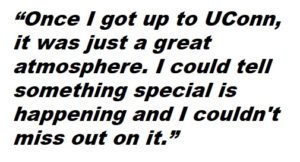 "I was committed to Coastal Carolina," Brown confirmed over the phone on Tuesday. "Of course, Coach Cox was there and he moved up to UConn, so there was familiarity there. I also knew Coach Edsall at Maryland from my sophomore year when he recruited my teammate Ty Johnson, who's at Maryland now. He's one of my good friends, so I kind of knew about Coach Edsall. Once I got up to UConn, it was just a great atmosphere. I could tell something special is happening and I couldn't miss out on it."

What did Brown like best about being in Storrs?

"I liked the school," he said. "It's kind of like it's own little town, it's unique. I got to hang out with some of the recruits and some of the freshmen that are already there. It seemed really cool, they care about each other and seemed like we can become a family. I like that."

He also had a chance to talk with Edsall on the trip.

"We had a chance to sit down, myself, my mother and my uncle," Brown said. "He told us that he wanted this recruiting class to be the base of what he was going to put together. He wanted to bring the success back to when he was head coach, back to where it was and he's trying to get guys in this freshmen class that he can build on. I was excited and certainly happy to be a part of it."

Following word of his commitment, Brown confirmed that he was recruited to UConn as a safety and did so again during our discussion a day later.

"I was recruited as a safety," he verified. "I know the defense that they run, they have five safeties on the field. They were trying to get a lot of DB's in with this class and they just told me they like me at safety."

Brown, who stands 6' 1" 197-pounds, was the 2015 Times-News Player of the Year at Fort Hill in Maryland, where he has been entrenched in success. This past 2016 season was no different.

"It went pretty well, we won our fourth state championship in a row," he said. "We were undefeated. It was a great year and the support and community activities they do for us down there is a great thing to be a part of."

His speed is something that has stood out to observers of Brown from afar, as he ran close to a 4.3 while camping at Tennessee earlier in his high school career. It certainly is something he will be able to use to his advantage at the position, as range, as has been seen with Obi Melifonwu, can make you an elite player at safety.

"I ran 4.3's before, but I've gained a little weight, so I'm probably about 4.4 right now," Brown said a day after his commitment.

Having been around the game of football from a young age, Brown has built up a solid work ethic while also having a respect for the game he plays.

"I like to learn, watch film a lot and study other teams," he said. "I think that's a good trait to have. I've been playing since I was six. My favorite thing about it is the team aspect and how you can see the connections between football and life. Overcoming adversity in the game helps you overcome adversity in life, so that's what I like about playing football."